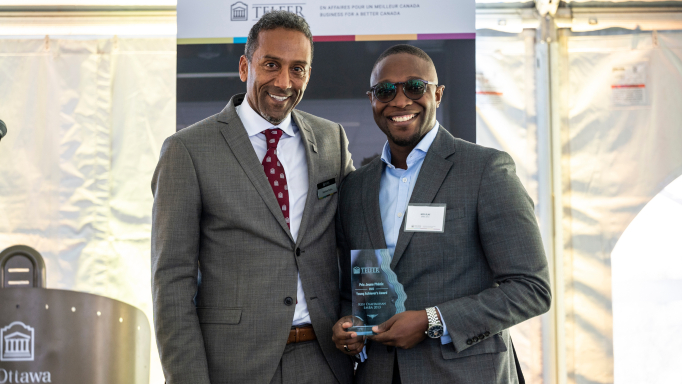 The Young Achiever's Award honours an alumna or alumnus from the Telfer School of Management who are under 40 years old and are achieving extraordinary greatness in their lives within exceptional timeframes. Kesi Olafimihan (EMBA ‘13) is the perfect example of such greatness in his career. In the last two decades, he has earned multiple degrees and climbed the career ladder to a Vice President position at a leading financial institution in Canada.

Olafimihan started his career at the Bank of America in early 2007 before transitioning to a role at TD Bank where he would stay for eight years. Today, he is the Vice President of Enterprise Digital Marketing Sales & Growth at Scotiabank, approaching nearly four years with the organization. It is safe to say the recognition is well-warranted as he has worked on becoming a strategic leader in the industry. Olafimihan credits his career growth with earning his Executive Master of Business Administration (EMBA) from the Telfer School in 2013. 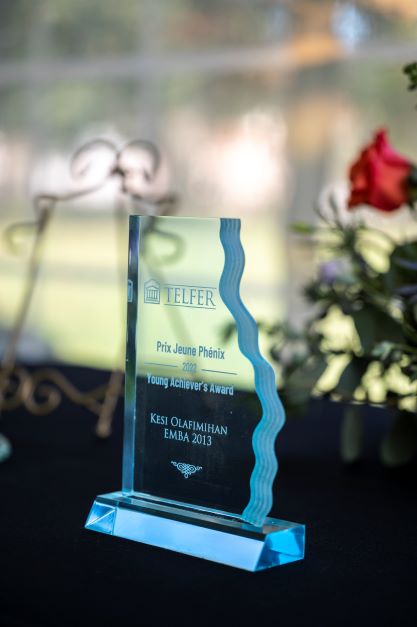 “[My EMBA] was the pivotal moment of my career trajectory,” says Olafimihan. Before the program, he excelled as a high-performing strategic executor, understanding exactly what needed to be done and fulfilling his job well. After earning his EMBA at Telfer, he elevated his thinking to a new level, becoming a strategic leader himself through the development of invaluable tactical ideas, as opposed to execution of strategy.

Olafimihan recalls building his understanding of the dynamics involved in running organizations in the EMBA: “The program was good at giving us exposure to well-established, big organizational structures and the nimble agility of smaller organizations like start-ups.” Applying the learnings to his industry, he recognized banking as a conservative established structure with one nuance — the innovation that boomed internally was similar to fast-paced growth happening at smaller organizations.

The Telfer EMBA program allowed Olafimihan to conceptualize the full strategic impact of business decisions and processes, but operate on a smaller, agile organizational scale internally: “That by far was one of the bigger changes in my career. I almost immediately started taking on more strategic roles,” he shares. Since completing his EMBA, Olafimihan has worked in strategic opportunities at the highest levels of organizations in banking, effectively becoming a key strategic leader.

Small Decisions Have a Big Impact 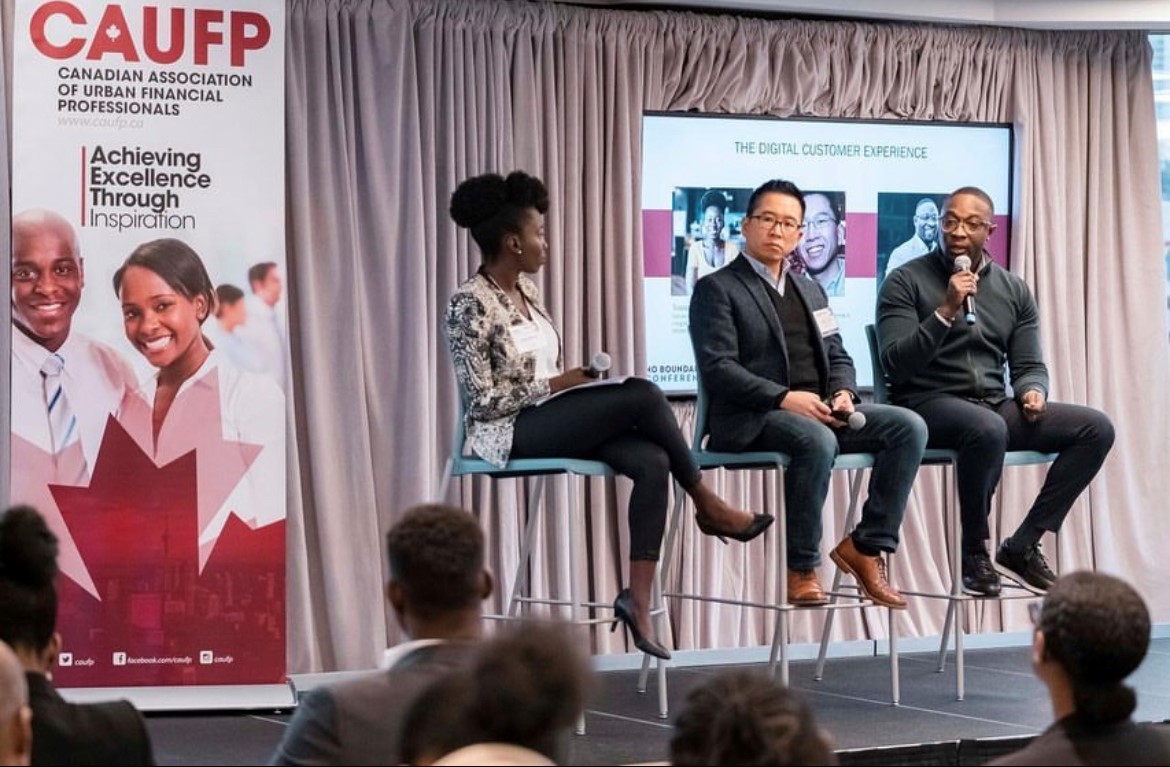 Olafimihan found himself in banking almost by accident. After graduating with a Bachelor of Engineering in Computer Systems, he chose banking nonchalantly. “Sometimes I look back on my career and I look at the small decisions that have a big impact. The choice to go into banking changed the course of my life and my career — I am in a space that captures all of my interests together,” shares Olafimihan.

Passionate about technology, innovation, and growth, Olafimihan is also motivated by business and strategy. This drive was something he learned in his childhood — both of Olafimihan’s parents are serial entrepreneurs who created multiple businesses from the ground up. After being exposed to an entrepreneurial spirit from a young age, it is well ingrained in him to this day.

Olafimihan feels grateful for his parents’ teachings and the small decisions that added up to the big picture: “I have the best job in the world. I love, love what I do.”

Change is an Opportunity for Growth 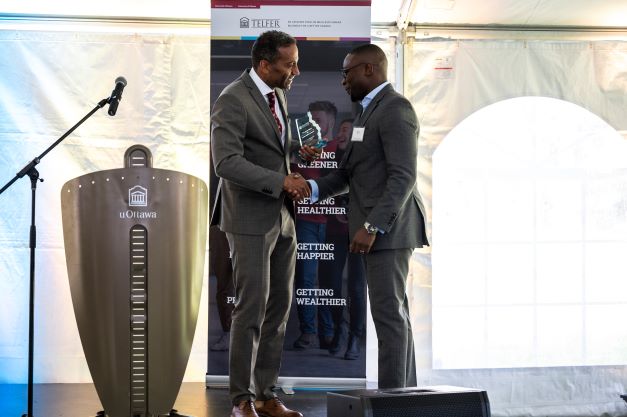 However, the journey to becoming a strategic leader was not always smooth. Olafimihan faced challenges around the spaces and cultures he found himself in, starting to learn early on in his career about the type of culture and leadership style that would align with his values.

These moments of learning allowed Olafimihan to be comfortable with change and to embrace it: “Sometimes you can enforce change, and sometimes you have to let change happen to you.” Going through these challenges, Olafimihan learned the power of new beginnings and new opportunities.

This positive mindset allowed him to embrace significant change in his career, from working at the Bank of America (BoA) during the 2008 financial crisis to witnessing the Canadian arm of BoA’s acquisition by TD Bank. Over time, Olafimihan learned to be more confident about growth through change by powering through fear.

Reflecting on his early experiences of seeking the right alignment with an organization, Olafimihan selected Telfer for his EMBA specifically because of the culture and leadership offered at the School. As one of the youngest candidates in his class, Olafimihan was not intimidated; on the contrary, he was excited to be surrounded by experienced business leaders. He knew exactly what he would bring to the table: his innovative approach to business and data. “One of the most valuable elements of the program was the scope of diversity and maturity present that really elevated strategic thinking overall,” says Olafimihan.

Leverage Experiential Learning in Your Career 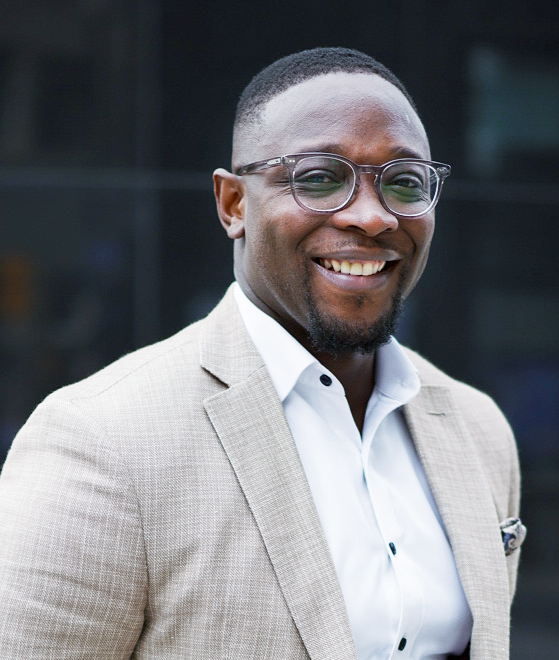 His comfortability with change, positive mindset, and elevated strategic thinking abilities are exactly what led Olafimihan to achieve so much in his career so far, becoming the strategic leader he is today. He feels very humbled to receive the Young Achiever’s Award and, going forward, is focusing on continually learning in his current position: “The majority of acceleration came in the last five years. In the years before, I was playing a long game with experiences that I was bringing into my tool kit.”

Mentoring young people, Olafimihan notices this specific aspect, slowing down, often gets missed — people often want to move levels quickly without accounting for breadth of experience. When he looks back on his career, he notes how he carefully built his broad set of experiences over the last 12 to 13 years. During this time of building and sowing seeds, he experimented with lateral and experiential moves, firmly believing that there are no useless experiences.

For example, during his time at university, Olafimihan conducted cold-calling interviews at one of his jobs. Now, he reflects on this early experience as a time when he learned to articulate his thoughts, act fast, and be quick on his feet. “Don’t waste an opportunity to gain a new experience. Play the long game with your career,” he says, clarifying that forcing a timeline on your career can be short-sighted and less conducive to becoming a strategic leader.

Continuously learning something new, Olafimihan is motivated to keep growing his toolkit through experience. We look forward to witnessing his accomplishments over the next stages of his career and view him as an inspiration to others who hope to become strategic leaders like him.

If you are ready to elevate your career by becoming a strategic leader, find out more about the Telfer EMBA program. The program enables you to unlock the business value of globalization and provides you with several hands-on opportunities to confidently apply your knowledge to real organizational challenges in various industry settings. Earn your skills in strategic leadership, management and thinking with EMBA courses like Leadership and Management: Team Skills, International Market Evaluation and Strategy, and Strategy Formulation and Interpretation.