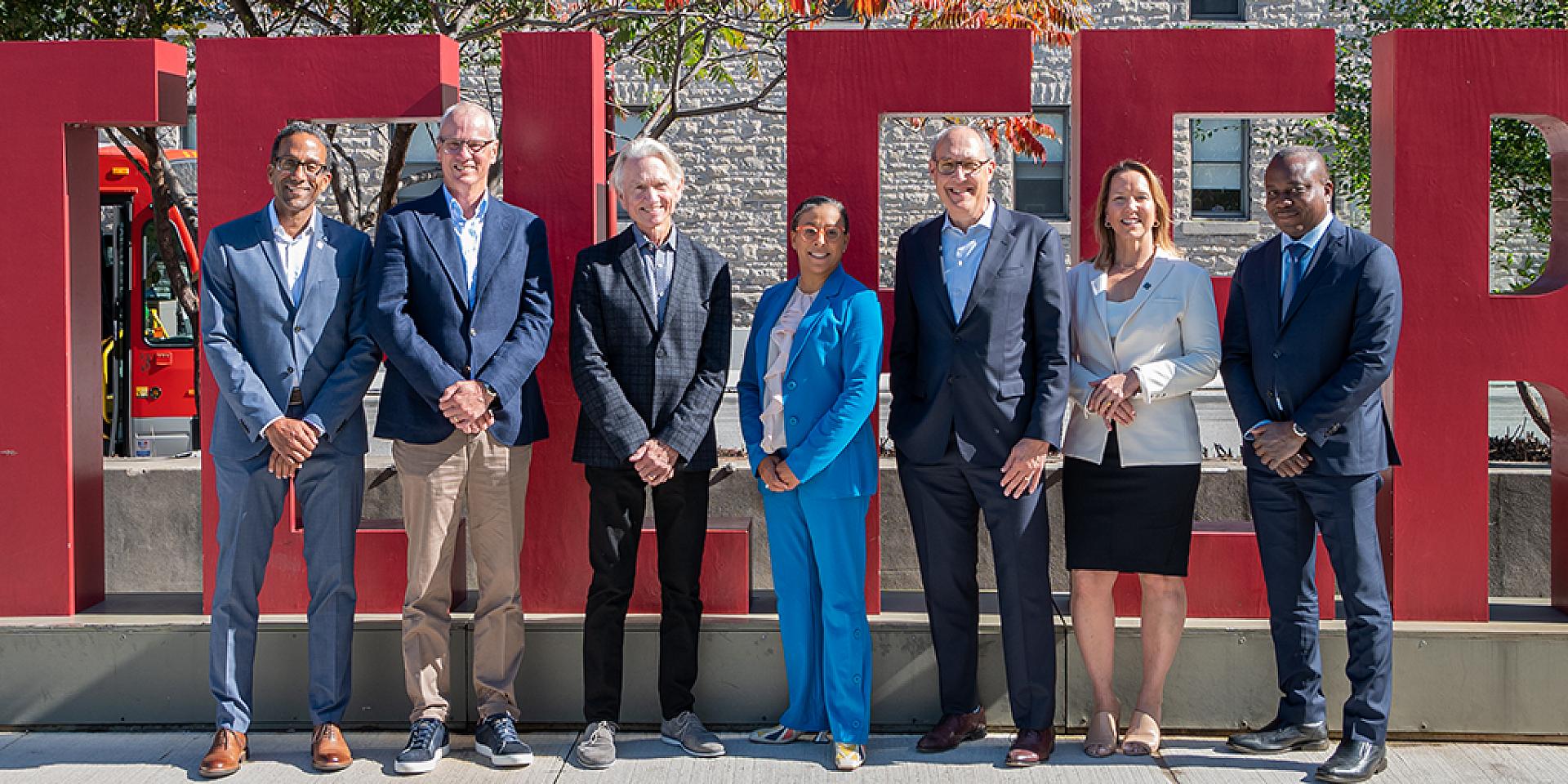 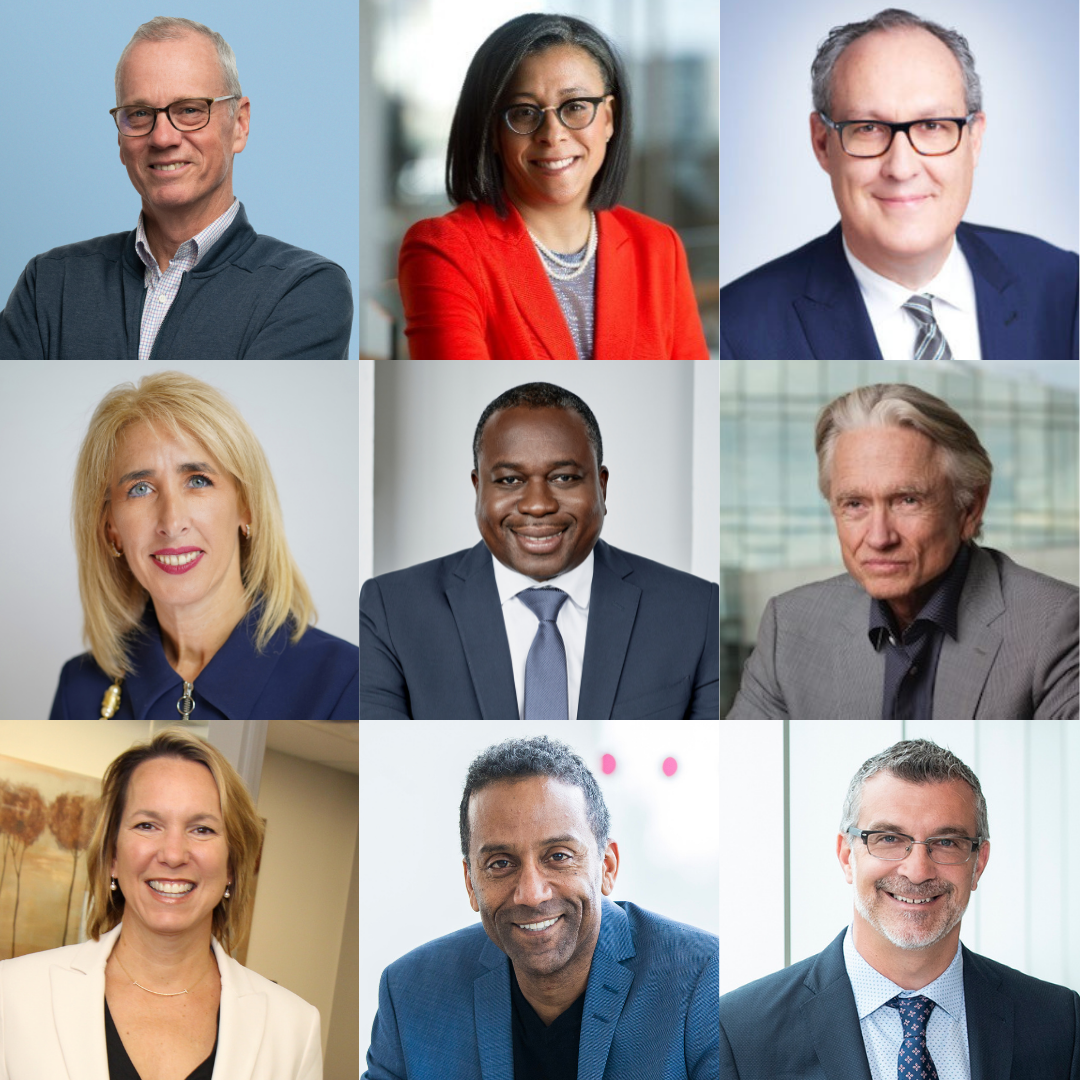 At the Telfer School of Management, we have formally named seven prominent Canadian business leaders to the School’s Strategic Leadership Cabinet to work with Dean Stéphane Brutus in order to advance the School’s Vision for a Better Canada. Each member of the cabinet brings years of experience to the table, leading some of the biggest and most influential businesses in Canada. Their first inaugural meeting takes place today, October 6th in the Desmarais building.

The Strategic Leadership Cabinet’s mandate is to advise the Telfer School with regard to its strategic choices and to provide information that will permit the evaluation of the relevance, quality, and effectiveness of its current and upcoming programs. The Cabinet also assists in identifying the ways in which the business community and the public sector can contribute to the strengthening of the School.

Rob Ashe - Chair of the Strategic Leadership Cabinet (Telfer BCom ‘82) joined Ottawa-based firm Cognos in 1984 and served as President and CEO from 2004 to 2012. He transformed the company into a world-renowned producer of business intelligence software and grew it to become Canada’s first billion-dollar software company. Ashe stayed on as general manager of business analytics after the organization's acquisition by IBM in 2008. With an avid interest in advancing the technology sector in Ottawa, Ashe has been the Lead Independent Director at Shopify since May 2015. He’s a 2020 Lifetime Achievement Award recipient, an award from the Ottawa Business Journal and Ottawa Board of Trade. He was also the former Lead Director of Halogen, until its sale to Saba Software in 2017. Ashe is currently an Executive Partner at Bridge Growth Partners, the Lead Director of MSCI, a Director of ServiceSource International, and a Fellow of the Institute of Chartered Accountants of Ontario.

Louis Gagnon (Telfer MBA ‘97) has been with Intact Financial Corporation, the largest provider of Property & Casualty Insurance in Canada, since January 2007.  Mr. Gagnon has served in many key executive roles beginning with Senior Vice President, Quebec, and including President, Intact Insurance; President and Chief Operating Officer; President, Service & Distribution; and, President, Canadian Operations. In June 2021, Mr. Gagnon was appointed Chief Executive Officer, Canada. In his current role, Mr. Gagnon is responsible for all Canadian-based business entities and operations including Intact Insurance, belairdirect, BrokerLink and Johnson Insurance. Prior to joining Intact, Mr. Gagnon headed a successful Insurance Brokerage with offices in Quebec and Ontario and was very active in provincial and national brokers associations. Mr. Gagnon is a member of the Board of Directors of the Insurance Bureau of Canada, member of the Telfer School of Management Dean’s Strategic Leadership Cabinet, member of the “Comité Consultatif International du recteur de l’Université de Montréal” and member of the Board of Directors of the CD Howe Institute. He has been an active board member and volunteer of many charitable organizations and is specifically very proud to have been involved with United Way for over 30 years.

Justine Hendricks (Telfer MBA ‘04)  has a demonstrated history of working in the financial services sector and has been a critical member of the Canadian export community since 2006 at the start of her career with Export Development Canada (EDC). She took on the role of Senior Vice-President, Sustainable Business and Enablement in 2019, and added the role of Chief Corporate Sustainability Officer (CCSO) in May 2021. Hendricks has worked closely with EDC’s banking partners and is a key component of the business development group. She received a Trudeau Medal in 2017 from Telfer in recognition of her leadership, initiative and contributions to the business world.

Patricia Saputo is the Co-Founder and Executive Chairperson of CRYSALIA, which supports Enterprising Families to succeed multi-generationally by creating and delivering deliberate learning journeys for their family members. She is a role model for female leaders in male-dominated industries, the business world, and the community. After her career at Deloitte in the Tax Department, she was asked to join the Board of Directors at Saputo once they went public in 1997. As a lifelong learner and a believer that education is a never-ending process - a process for the betterment of oneself, one’s family and for continued improvement of communities around us - she truly enjoys educating others.

Macky Tall (Telfer MBA ‘92) is the Co-Chair of Carlyle Infrastructure Group, which includes efforts across transportation, renewables, energy, water & waste water and digital infrastructure. Before joining Carlyle, Mr. Tall served in a series of leadership positions at Caisse de dépôt et placement du Québec (CDPQ), one of the world’s largest infrastructure investors and the second-largest pension fund in Canada. He also served on CDPQ’s Executive Committee and Investment-Risk Committee and served as Chairman of the Board of Directors of Ivanhoé Cambridge.

Ian Telfer (Telfer MBA ’76), the Telfer School’s namesake, is a Canadian executive and philanthropist who is known for his strategic business success in the mining and resource sector. Telfer is the former chairman of Goldcorp Inc., a Vancouver-based gold mining company, and former chairman of the World Gold Council. Telfer led Goldcorp Inc. since 2005, first serving as Goldcorp’s President and Chief Executive Officer before being appointed Chairman of the Board in 2006. Telfer has earned the reputation of being a ‘visionary mining entrepreneur’ for his ability to grow multiple mining companies. His 30 years of success in the resource sector can be attributed to an intrinsic aptitude for strategically timed acquisitions and value-driven mergers. In 2015, Ian’s career in the mining sector earned him induction into the Canadian Mining Hall of Fame 2015, and the Canadian Business Hall of Fame in 2018. Telfer was also awarded an honorary doctorate from the University of Ottawa in 2015.

Kathryn Tremblay (Telfer BCom ‘95) is the CEO and Co-Founder of excelHR, Altis Recruitment, Altis Technology and excelITR, with over 30 years specializing in the human aspect of human resources. She has dedicated her career to the betterment of the staffing process, launching her entrepreneurial journey at the age of 21 when she launched a small staffing firm in the Outaouais region. Tremblay paved the way for a new way of qualified job sectors with prospective employers particularly when it comes to filling executive roles. With its affiliated companies, excelHR has become a recognized leader in the delivery of recruitment and staffing services in Canada. Tremblay is an avid mentor for women in the workforce and encourages young people to pursue a career in entrepreneurship. She was also named the 2021 CEO of the year by the Ottawa Business Journal and the Ottawa Board of Trade.

Stéphane Brutus is currently the Dean of the Telfer School of Management. Between 2006 and 2017, Dr. Brutus served as Dean (Interim), Associate Dean Graduate Professional Programs, Chair of the Management Department and Director at the Bell Research Center for Business Process Innovation at the John Molson School of Business, Concordia University. Previously, Dr. Brutus worked as a Visiting Professor at Universidade Federal da Bahia, in Brazil and Universidad Pablo de Olavide and Instituto de Empresa, in Spain.

James Price - Secretary of the Strategic Leadership Cabinet, is the Executive Director of Development and Community Engagement at the Telfer School of Management and is responsible for leading the school’s external outreach vision, development, and community engagement initiatives. Driven by a desire to make a positive impact on society, he takes great personal pride in building sustainable relationships and partnerships to advance higher education, research, innovation, and economic development. Prior to joining the School in 2019, James led Canada’s national stem cell advocacy and strategic funding efforts as President and CEO of the Canadian Stem Cell Foundation.